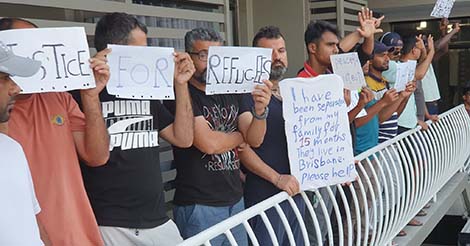 After seven year’s detention, including up to and more than a year of closed detention in Australia, serious mental health issues are emerging among those refugees transferred from Manus and Nauru for medical treatment.

On Sunday night (3 May), one Iranian refugee in the Kangaroo Point hotel has attempted to kill himself by hanging. At least two others are refusing food, one for over 17 days. The other was taken to hospital after collapsing on Monday 4 May, and was returned to the hotel several hours later.

They are signs of more widespread mental health issues among the refugees and asylum seekers transferred from Manus and Nauru.

The mental health of others in detention in Melbourne is also deteriorating. Many people no longer come out of their rooms.

One Iranian refugee from Nauru who has been in detention in Australia for 15 months told the Refugee Action Coalition, “I no longer have any hope, I just stay in my room, waiting.” Another refugee from Manus said, “People are waiting to end their life in Australia. The government has no solution.”

“The sick irony is that many people were transferred from Manus and Nauru because of serious mental health problems caused by the trauma of years in offshore detention,” said Ian Rintoul, spokesperson for the Refugee Action Coalition, “But there has been no meaningful treatment in Australia. There was never any possibility that they could recover by swapping offshore imprisonment for onshore detention. Detention centres are factories of mental illness whether onshore or offshore.”

“It is very obvious that detention is the biggest health risk,” said Rintoul , “The protests inside and outside detention will continue until the refugees are freed and allowed to live freely in the community.”