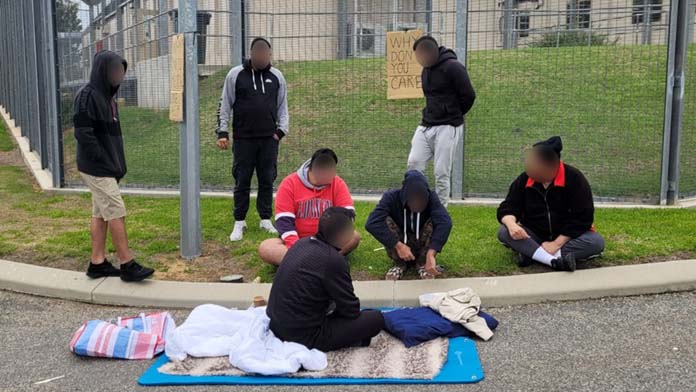 An Iranian asylum seeker who has been detained for over nine years has begun a peaceful protest in Yongah Hill detention centre to try and get false teeth.

All Mirza wants is an appointment with the dentist.

For the last five days,  “Mirza” (not his real name) has been holding a peaceful protest outside the office of IHMS, the detention medical provider.  For the last two days, other immigration detainees have joined his vigil near the IHMS office.

“Mirza”, has been forced to live without teeth since his set of false teeth were stolen along with other property items, after an incident with another detainee, two years ago. Since then, his requests to Border Force and IHMS to replace his false teeth have been ignored.

The blatant neglect has made Mirza’s life a misery. It is one example of the myriad abuses that are inflicted on asylum seekers in detention. He is unable to eat solid food, and suffers considerable pain and discomfort because of the medical neglect.

“An animal would not be treated this way,” one Iranian refugee told the Refugee Action Coalition.

Another detainee said that the Yongah Hill manager has told Mirza to make a complaint to IHMS, but Border Force and IHMS have received many complaints. “They walk past him like he doesn’t exist,” he said.

Mobile phones are now banned from the IHMS office and appointments at Yongah Hill so that immigration detainees cannot record the neglect and contempt they suffer at the hands of the medical provider.

“To refuse to make a dentist appointment and provide Mirza with a set of false teeth is criminal,” said Ian Rintoul, spokesperson for the Refugee Action Coalition, “It is a complete violation of Border Force and IHMS duty of care. Such a seemingly small thing has a huge impact on Mirza’s quality of life.

“Such abuse is only possible because there are no checks and balances inside the detention system. It is built to brutalise and de-humanise those held inside the fences. Mirza has committed no crime. He has been held in detention since he arrived by boat in January 2014.”