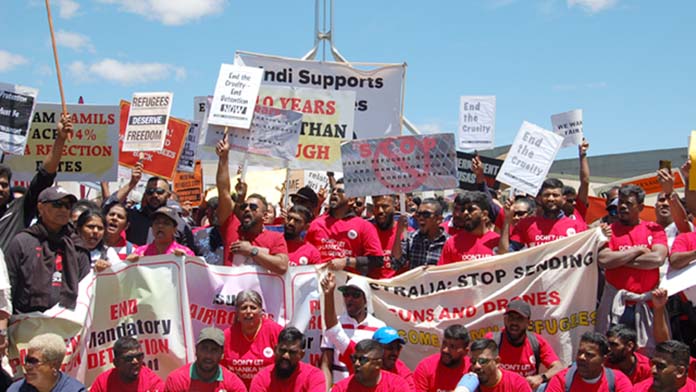 More than a thousand refugees and their supporters rallied outside Parliament House in Canberra, on 29 November to demand permanent visas for refugees.

Priya Nadesalingam, from the Biloela family granted permanent visa by the Labor government told the rally, “I believe the ‘fast track’ system was unfair. The people who interviewed us had no idea about what has happened in Sri Lanka for Tamils. The policies were made specifically to fail us.

“It has been ten years and people can’t keep repeating this process. We want to build our future. So I’m asking everyone that this has to come to an end.

“We need to grant permanent residence to everyone, so we can live our lives peacefully. The 31,000 people need permanent visas now.”

More than 31,000 refugees and people seeking asylum have been surviving for up to nine years and more, on temporary protection or bridging visas. Others are eking out an existence in the community on expired visas.

Labor came to office promising to grant permanent visas to all refugees on temporary TPV or SHEVs and to scrap the fast track assessment system that has seen around 10,000 refugee applications rejected.

Saajeda, an Afghan refugee, co-chairing the rally, asked, “Why must we keep begging the Australian Government to give us safety and permanent protection? It is very clear that refugees from Afghanistan, and other places like Myanmar, Sri Lanka and Iran cannot return to live safely.”

Labor has also turned a deaf ear to refugees brought to Australia from Nauru and PNG, ignoring the torture inflicted on them offshore and the fact that many now have jobs and families in Australia.

Zahra, one of the speakers at the rally said, “The refugees sent to Nauru and Manus have been punished for a decade for seeking Australia’s protection. Offshore refugees have been denied protection just because of the date we arrived. Some people who arrived after 19 July 2013 weren’t sent offshore and will soon get permanent visas. Labor’s policy towards us is like a cruel lottery.”

“Nine years is enough torture and uncertainty,” said Ian Rintoul, spokesperson for the Refugee Action Coalition, “Cruel, heartless and hypocritical refugee policies have to end. Labor said no one would be left behind,  but six months after the election thousands of refugees and asylum seekers are still waiting.”

Today the Hazara community joined the refugee national rally in Canberra to call an end to the temporary protection visas. This cruel temporary regime has been going on for over a decade now, the Australian community has voted for a human and compassionate refugee policy. It’s time for the Albanese government to deliver on their election promise and put an end to this cruel refugee policy, allow refugees to have a stable life and reunite with their families and loved ones.

Thousands of Afghan refugees on temporary protection visas are not eligible for family reunion  despite the desperate circumstances for their families in Afghanistan.

The event was attended by Senators Pocock and Thorpe.

Here is a link to the speeches outside parliament house today.