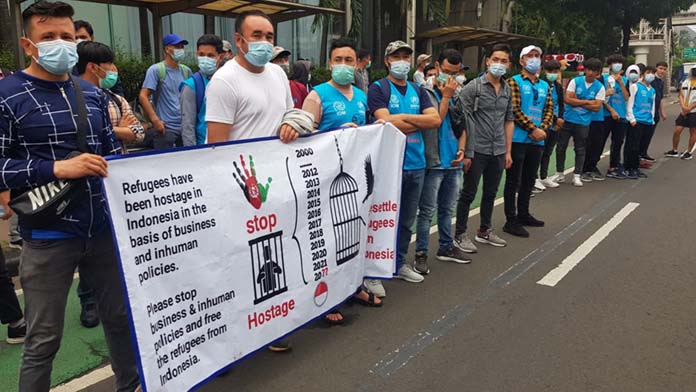 Hundreds of mostly Afghan refugees are protesting today in Jakarta calling for resettlement and for basic support while they are stranded in Indonesia. The protest will assemble at the Canadian embassy and march to the IOM (International Organisation for Migration) office.

Survival in Indonesia has become even more difficult in recent years as IOM, which is funded in the most part by Australia, has not given any allowance to arrivals since 2018. Many refugees have no support at all.

The IOM allowance has also fallen well below the poverty line in Indonesia as the cost of living has dramatically increased with inflation over the last year.

“Already poverty conditions in Indonesia have become impossible in recent months, as everything from cooking gas to washing powder, food and medications have dramatically increased in price” said Refugee Action Coalition spokesperson, Ian Rintoul, who was part of a fact-finding mission to Indonesia in October, 2022.

“That allowance should be doubled and paid to every adult,” he said. “I saw families of two adults and four children trying to survive on one allowance, because IOM won’t support recent arrivals and won’t pay an adult allowance to children when they turn 18.”

The Albanese government has said that it will fulfil the previous Liberal promise to resettle 16,500 Afghan refugees (over four years) on top of the annual humanitarian intake. But reports from Indonesia from UNHCR indicate Australia has set a quota of just 250 Afghans to be resettled from Indonesia this year.

Nor has the Labor government lifted the ban, imposed by the Morrison, on taking any refugees from Indonesia who arrived after July 2014.

“Desperation in Indonesia is driving refugees there to protest,” said Rintoul, “Their fate is in Labor’s hands. The increase in the humanitarian quota is expected this year to increase from 13,750 to 27,000, enough to bring all the refugees in Indonesia to Australia.”

Photo of Melbourne ‘solidarity with Indonesia’ protest at Immigration office, Casselden Place, today (19/1) attached. A Sydney protest will be held at 5.30pm at Sydney Town Hall.

Contact for Afghan refugee in Jakarta available on request.